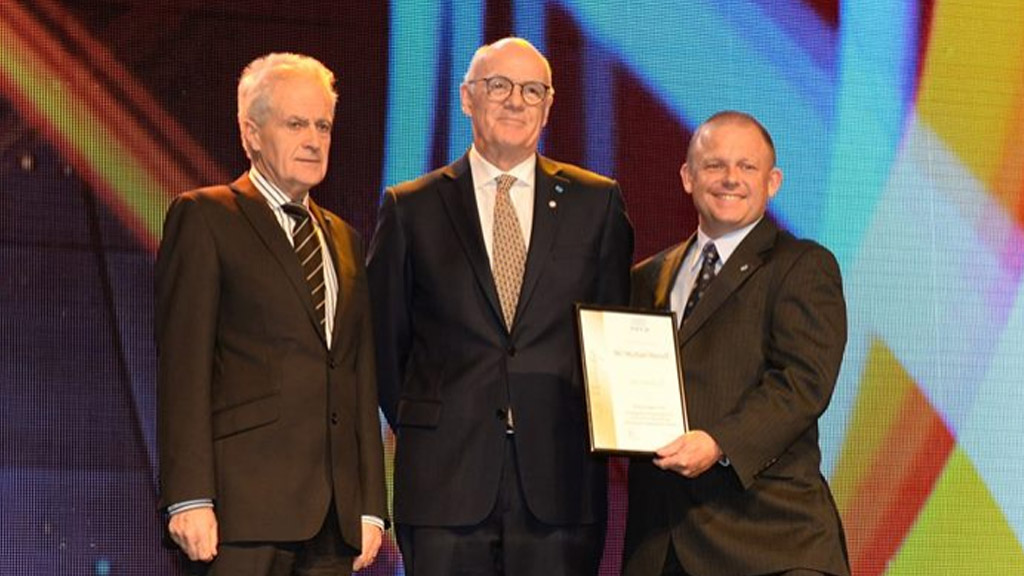 Many of you may be aware that Dean, our Managing Director is also the NECA VIC Council President. NECA being the National Electrical and Communications Association and is the peak industry body representing the interests of the electrical and communications contracting industry across Australia.

Dean is pleased to report that NECA have recently added Mike Purnell as their newest life member.

Mike [centre in our image above] is well known in the electrical industry for his active participation. He does not do things by halves. He has a unique way of looking at problems and getting people motivated to a cause.

“Michael is a gentleman, caring and family orientated and a pleasure to be with. He is known for his rigorous debate, his work ethic, and his preparedness to challenge convention and learn from others. He loves a laugh and does not take himself too seriously and he’s a great supporter of the Hawks” – Dean Spicer- NECA VIC Council President.

A bit of background…

Mike did not start life in the electrical industry. His background was in finance & business restructuring until he became the General Manager of Nilsen, a position he held for 13 years.

Whilst General Manager of Nilsen he participated on the Industry Advisory Committee, the EBA negotiation team, regularly contributed to the NECA Project Management Diploma presenting his favourite topic of “leadership”, served on the NECA Council and represented NECA on the Protect Board.

Mike has actively contributed to the recent business turnarounds at NECA Education & Careers and NECA Victoria (where he stood in as Executive Director for 6 months). He also undertakes industry consulting assignments specializing in business rebuilding.

Mike has always said his goal is to make a small difference – he has certainly done that. NECA is appreciative for his passionate ongoing contribution to the industry.